Sorry that I haven’t posted sooner, but there’s been a lot going on. Admittedly, most of it is just your typical around-the-property chores like clearing brush, driving around in the pickup, chainsawing dead trees, and chasing bobcats off the property with a hoe (I know, booooring), but it’s still pretty daunting. Sure, most farmer-types probably bang these things off their to-do lists before breakfast, but for us – this stuff takes time!

We did tackle one task, however, that was pretty exciting…

As you know we had a large chicken coop built on the property. We plan on having about 40 birds, and with the number of predators we have around here, we knew that not only would we need plenty of room for the birds to free-range, but that we’d have to invest in some serious fencing as well. So we marked off a quarter-acre (or so) rectangle between the barn and the house (land that rises steadily at about a thirty degree angle), then got ourselves a contractor who would do most of the work installing 4×4 posts and polypropylene deer fencing around the perimeter.

The contractor, who happens to be a neighbor, told us we could save some money if we could dig the holes ourselves, and since we do have this nice, new tractor…well, long story short, we went and got ourselves a large auger with a PTO attachment for the Kubota. If you’ve never seen this kind of thing let me tell you – it’s huge. Twelve inches in diameter and about four and a half feet from top to bottom.

It’s actually quite fun and simple to use, once you get a tutorial and assuming you’re digging on flat, healthy land. For this job, though, we’d have to navigate the tractor across some really steep patches of arid and loose earth, pock-marked with gopher holes. So not quite so fun and simple to use after all, it turns out.

Our neighbor had already marked the spots where we were to drill, so Lizzy directed me while I drove the tractor and operated the auger. We had to drill nine or ten holes along a path that traversed the property horizontally, then about fifteen running down the hill to the coop, then several more along the bottom (the final vertical length, which runs dangerously close to our gas line, will be dug by hand). It was the first bit – the row near the top of the hill – that carried the most risk.

The experience was harrowing. I had to back the tractor across the hill sideways, and even though the spot we had chosen was on somewhat of a plateau, the angle there was still around 15 degrees – steep enough for me to feel like I could tumble port over starboard at any second.  In fact, I experienced several moments of sheer terror and near-slips before I even backed up to the first hole.

Unfortunately I was unable to take any pictures, as the mechanics of the act – that is to say, boring massive holes with heavy machinery on a brittle and steep bluff while narrowly avoiding rolling to my death amid a couple of tons of metal and diesel – left very little room for holding a camera. Somehow, miraculously, we managed to finish the task unscathed: 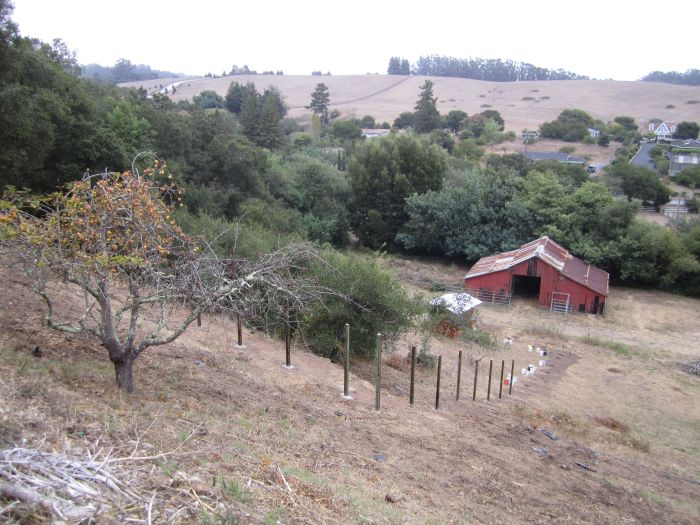 This picture was actually taken a couple of days later, after the several posts had been set, but you get the idea. It’s a little hard to see here, but look at the posts in the foreground. See the drop? Now picture me, strapped to a tractor, rolling all the way down the hill, stopping only after crashing through the paper-thin walls of the old barn. Now picture Lizzy, suddenly wishing she had looked into that offer for a life insurance policy we got in the mail the other day…

Anyway, as I said we pulled it off, if only just barely, so that’s that. More to come on some of the moderately less-dangerous things, like canning pears, that have occupied our time these last few days…

One thought on “If Only Drilling Was More Boring”