I thought I’d pick up on Jason’s “Farm of Horrors” theme and write about the truly frightening animals that live out here.  And by “here” I mean our own land – sometimes very close to the house.  Luckily, we knew ahead of time about these creatures, and immediately upon moving we confined our house cats to the indoors every night from dusk till dawn.  Forever and ever, amen.

But I will start this list with the large, numerous animals that are not predators.  Our white-tailed deer.  Every evening (and occasionally during the day) we will have several deer in the apple orchard in front of the house:

These two bold ones didn’t even wait until dusk.  Here’s a closer photo: 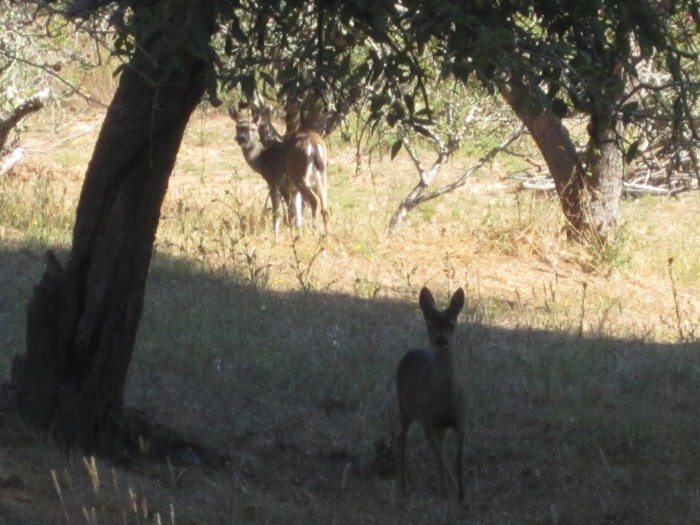 And here’s a pretty good photo taken another day: 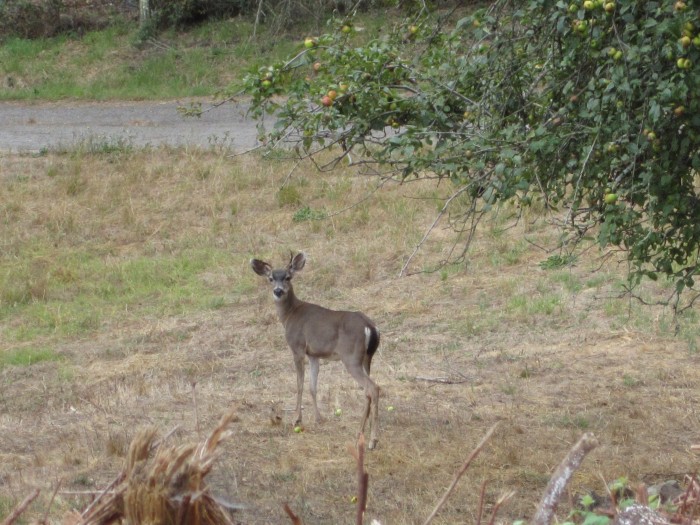 By now you’ve figured out that we’re not the best nature photographers.  In our defense, they usually come by at dusk and run away when they see us.  Just imagine three or four of these lovely creatures ambling about every evening right down the short bluff in front of the house.  Now that it has started raining more often, we can see the hoof prints EVERYWHERE on the property.  And the forested areas are criss-crossed with deer trails.

The only problem with that is, the more deer we have, the more predators come who’d like to eat them.

But I’ll work up to that slowly.  Next up on our list is Bobby the Bobcat.  This summer we saw it about every other day, mid-morning, also in the apple orchard.  Bobby did NOT run away when it saw us.  Bobby ambled.  It didn’t give a damn.  Very unnerving when one’s cats are outside.  After all, the sun was up and they theoretically should have been safe from predators.  Luckily the cats mostly stay close to the house.  I didn’t take this photo, but it shows a bobcat beautifully:

Next I’ll show you the creature who is going to eat our chickens, once we get them.  Well, I shouldn’t say that.  There are LOTS of creatures who will be trying to eat our chickens, and it will be an interesting experiment to see if we can keep any alive at all.  My (foolish?) hope is that the fence with electric wire around the top, plus the bomb-proof coop for nighttime will take care of all but one main predator.  But that predator lives on the property.  Not far from the coop.  The fence won’t help at all against:

The red-tailed hawk.  Since moving in we have seen it in its redwood tree, soaring across the property, or circling something on the property almost daily.  And we hear its cry, of course, that high descending note that I now associate with dread.  I have (again: foolishly?) decided that our chickens, when we have them, will be in a large, fenced, but uncovered yard during the day.  Their only defense against hawkie will be running under a nearby tree.  Wish us luck.

We have only seen this next friend once, but it was memorable.  It was 8:30 am on a sunny Summer morning, and we were in the driveway getting ready to take Sarah to school.  Jason saw a glimpse of something near the back of the house and I ran to take a look.  It was one of these: 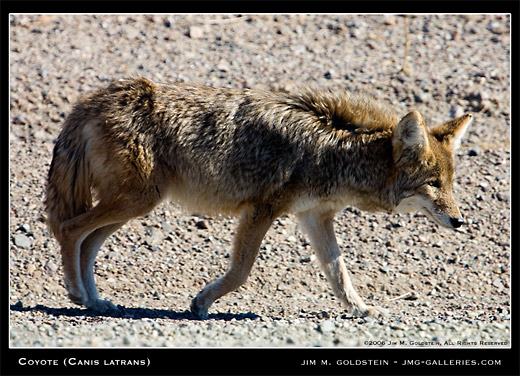 Except ours was much skinnier, and skulking away quickly.  Again, the cats were out.  We have only heard coyotes howling at night three times in the five months we’ve lived here.  But just a few days ago two guys working on our land said they saw a big one down by the barn.  During the day.  We were down there today and there are HUGE paw prints in the mud.  How big do coyotes get, anyway?

The above shows one of the many huge paw prints down by our barn.  It isn’t the neighbor’s dog; I checked.

On a lighter note, here are two friends whose fates are intertwined.  Predator and prey: 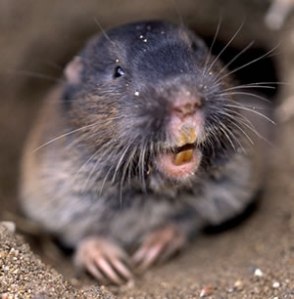 Here is the gopher snake, one of which I actually saw and almost raked up while raking grass this summer.  I’m not afraid of snakes, but these guys are rather large and it was a bit of a shock.  I decided to leave him alone.  After all, he will hopefully eat lots and lots of gophers.

I think I need to explain about the gophers in this area.  There are GAZILLIONS of them! Everywhere!  I mean, you can’t walk two steps on any part of our land without twisting your ankle on a hole or bump of dirt caused by the digging of said hole.  And who did the digging?  Yes.  The gazillions of gophers.  And we foolishly think we’re going to grow a garden in the spring.  Similar to the chicken situation, we are going to find out that our garden will be almost completely at the mercy of these vegetable-killing creatures.  Sigh…

Last week a buck was hit by a car and killed, and it wound up on our property.  The coyotes had started chewing on it, and we heard from the neighbor that it was our responsibility to deal with the carcass, so we hauled it on to the back of the pickup and plopped it on the upper pasture.  The coyotes made short work of it for two nights, and then the next two days we got to see these guys cleaning off the bones (not my photo): 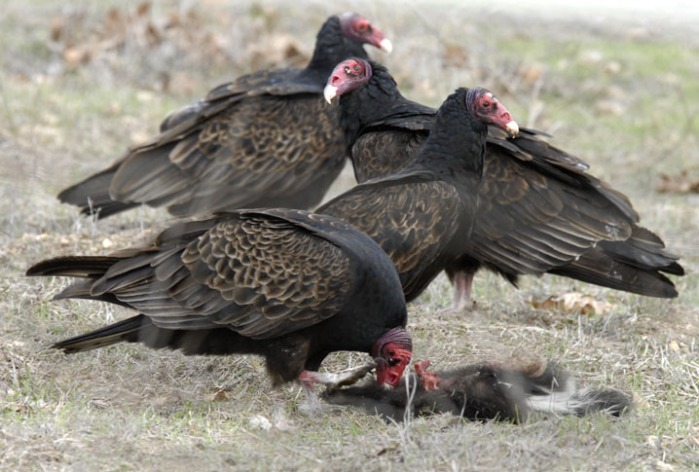 We had three turkey vultures, not four, but they were still really cool.  And really big!  When we got too close, they flew away over us and they flew really low so we got to take a good look.

Anyway, on to the coup de grace: the thing that can eat PEOPLE.  When I first heard these lived in our county I thought: “Oh not near us, surely.  Maybe farther into the protected forest lands, way up away from houses and such.  But not near here.”  Turns out I was wrong.  Someone working on our spring saw one in our upper pasture.  And then another day Jason, Sarah and I found and collected these:

Bones from a six-point buck.  The femurs are broken in half.  This buck met his fate some time ago, but still it’s an unmistakable sign.  Then last month Jason was walking to get the morning paper and he saw a killed and freshly EATEN fawn right by the driveway.  In fact, down by the road.  I will spare you the photo I made him take.  The consensus among the neighbors was that it was the work of this noble creature: 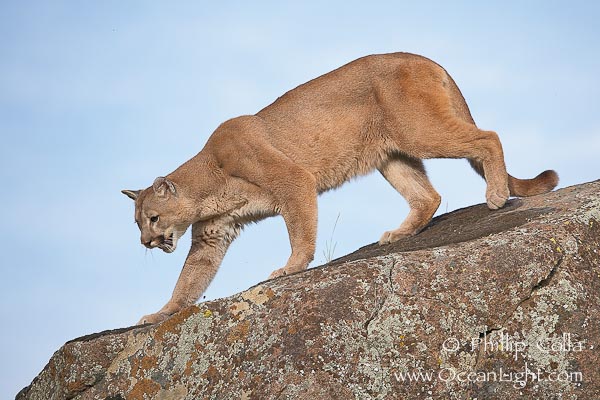 The mountain lion.  This is the biggie.  Forget about house cats, this one could eat ME.  I really hadn’t planned on having this guy on our land.  Luckily, there are plenty of deer around for it to eat, but hopefully it won’t make a habit of eating its dinner at our place.

Don’t get me wrong, I actually really love living in the country and seeing the native wildlife.  It’s still a thrill each time I see a deer even though I should be bored with them by now.  But I hope that I myself don’t become part of this wonderful “circle of life” I keep telling my daughter about!

2 thoughts on “Lions, Tigers and Bears, Oh My!”