So sorry about the long delay in posting – we’ve been busy!  Summer was a blur of full-time work (for me) and trying to keep up with the garden (for Jason).  But for the last two months we’ve been trying to deal with the fruits of our labor – quite literally.  Now we really understand the concept of harvest season.  I will try to show the sheer vastness of our harvest in photos. 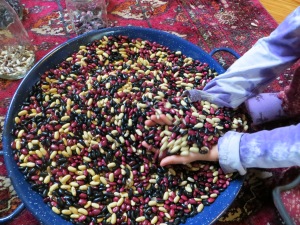 We grew four types of dry beans (as well as two types of fresh green beans).  When the bean pods were dry we picked them and brought them to the house, then we shelled them into this pan, then we sorted them into containers by type.  I should not have written “we”.  Jason did all this almost single-handedly over many hours and many days.  There are many, many more than this photo shows.  Shown here: Sarah running her hands through the beans – it feels great! 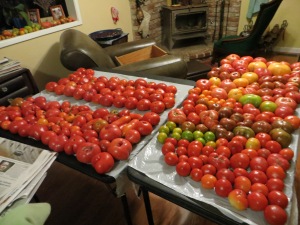 What to do with too many tomatoes?  I ate them all summer and early fall literally for breakfast, lunch, dinner and in-between snacks.  Every day.  In October I finally reached my limit.  Jason canned like crazy.  He also dried them in the oven and packed them in oil (cherry tomatoes), and…

The pear tree went crazy this year.  In the spring it bloomed before the apple trees did, and our bees (we have a hive) absolutely covered the whole tree.  It was humming!  As a result, we got a bazillion pears!  They’re more problematic to deal with in quantity than apples, since they ripen and rot so quickly. 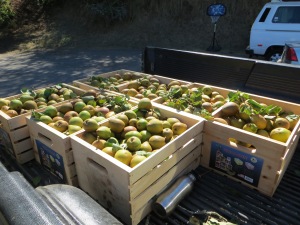 We wound up with seven crates of pears!  And we couldn’t even reach the pears in the top 1/4 of the tree!  We wound up making pear butter, pear sauce, canned pears and dried pears.  How did we dry the pears, you ask? 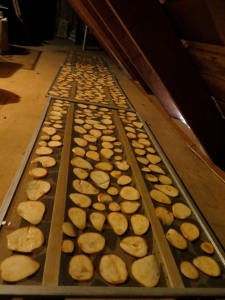 I’m glad you asked.  I must toot my own horn about this one.  Thought it up myself, I did!  We have some very hot days in September and October here in California, and I’ve been wanting, but too lazy to build, a solar food dryer.  Instead, I realized how hot it gets in our attic and found that we have a pile of unused window screens leftover from the old windows we switched out.  We also happened to buy a mandolin (the slicer, not the instrument) for $3 at a yard sale across the street.  Combine all these and you get a perfect way to dry pears!  They came out delicious.  It worked so well I’m also drying apples as I write these words.

We also harvested three crates of potatoes, which are now being stored in the apple shed with the winter squash and the apples.  And one last half-crate of pears that refuse to ripen.  Jason fixed up the apple shed by emptying it of junk, replacing all the screens and putting new wood on the floor where hungry animals and rot had taken their toll.  The apple house is really supposed to be for apples only, and the potatoes and squash will wind up in the new root cellar when it’s finished.  The root cellar will have to be a blog all of its own – stay posted. 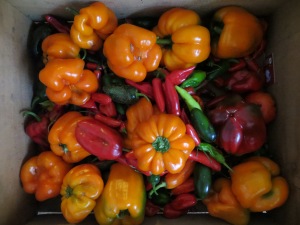 The peppers finally ripened, all at once, in late October.  We have a combination of sweet yellow and red, as well as a couple types of hot.  We made a big fry from sweet peppers and sweet onions and had wonderful fajitas, with lots of leftovers.  The rest of the peppers are in the fridge.  Both the sweet and the normal onions are still in the ground.  Don’t know quite what to do with all the sweet onions, since they will not store well.  Our plan for the normal onions is to hang them in the attic and under the stairs and use them all year.  Any suggestions for what to do with the sweet?  Caramelize and can them, somehow?  Our freezers are full, so it will have to be a canning solution…

Most recent harvest, late October: some parsnips and kale, a pile of pumpkins and winter squash, and the last of the cherry tomatoes (with a couple of peppers thrown in).  The rest of the parsnips are still in the ground, but will be stored in the aforementioned root cellar.  The kale we’ll just leave in the garden to continue growing.  Most of the pumpkins are sugar pumpkins for eating, but we wound up with three for carving for Halloween: two from a volunteer plant!  The closest yellow round thing in the photo is a mini-watermelon from “Sarah’s” garden.  It was ripe, but not fantastically sweet.  We won’t bother with that again next year.

As though I didn’t have enough to do, I convinced my neighbor to make jelly with me out of her Concord grapes.  It turned into a saga.  She harvested all the grapes, but half of them rotted before we could coordinate our schedules to make the jelly together.  The non-rotten half wound up being 21.5 pounds of grapes!  We followed a recipe I’d found online, which said no pectin was needed and it would thicken in 20 minutes.  Turns out it took 5 hours.  In retrospect, I should have just given up after an hour and run to the store for pectin.  Instead, I stirred that darn jelly for hours during 80 degree weather!  Here is Sarah happily helping at the beginning of the grape jelly saga.  Needless to say, her interest flagged as time wore on.  Anyway, my neighbor and I made 23 jars of jelly, but she would only take 3 jars!  What on earth am I going to do with 20 jars of Concord grape jelly?!? 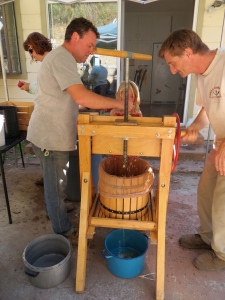 And then, of course, the apples.  As you probably know, we have a whole orchard full of them.  I’m not actually sure how many trees we have – somewhere around 40.  We started harvesting in September and have been flat out ever since.  And we’re not done.  We had three weekends in a row when folks came to visit and helped us make cider!  First our friends Paula and John (pictured) who taught us how to process chickens last year, then my great friend Luisa and her daughter and daughter’s friends, then Jason’s aunt Margurite and uncle John from Massachusetts.  We have given away a few gallons and the chest freezer could only hold 10 gallons of cider this year (it’s full of 1/2 a lamb and 1/2 a pig we got from a nearby ranch).  But we have many more apples to press – yikes! Where will we put it?!?  Time to make more hard cider, clearly.  I also need to make apple sauce and, as I mentioned, am drying some too.  The “perfect” apples (few and far between) will remain in the apple shed for eating throughout the year.

I am currently in negotiations with someone who is raising turkeys locally; I’m hoping to trade 10 gallons of cider for a Thanksgiving turkey.  Wish me luck!

Sorry the post was so long, and so long overdue!  But thanks for reading!

The garden is really shaping up nowadays!  If we can only control the dang-blasted gophers, we should have a great harvest.  We are already drowning in lettuce, and took a stab at selling at our nearby Farmer’s Market.  Here’s a photo essay of the progress:

You can find us – and many other wonderful vendors – at the Corralitos Farm/Garden Market, which is held in front of the Corralitos Cultural Center: 127 Hames Road.  Take a left just after the Corralitos Meat Market, and you’ll see the yellow sign and the blue awnings on the left.  The Market is open Sundays from 11:00 to 3:00.  The produce is all VERY local, organically grown, and very reasonably priced.  See you there!